We opted for overland travel as opposed to backpacking to allow for more flexibility in our travels, roving from town to town independent of rigidly-scheduled mass people movers.  The idea spawned from a Montana road trip during the summer of 2009.  We had made reservations at the finest fleabag motels in all of Montana while in the comfort of our home living room.  But having rented a 4×4  we opted to strike out on our own adventure, leaving the preplanned trip in the dust.  The idea of having all that you need with you opens the door to possibility.  For us, the ability to pull over at any spot that strikes our fancy is worth the added cost of overland travel.  See also: an alpine trad rack, surf board and typewriter won’t fit into a backpack.

Our eyes were soon set on a late model Sportsmobile.  The price tag humbling, we re-evaluated and opted for an early model Toyota Tundra combined with a pop-up truck camper. 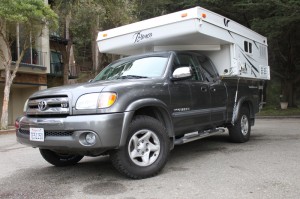 We were driven to Toyota due to the parts and service network throughout Latin America.  One traveler provided horror stories of air shipping Ford brakes to clueless mechanics in Ecuador.  While the Tundra is not distributed in Latin America, the Toyota network will never be far.

We settled on the Tundra over the Tacoma for a few key reasons: the larger frame and V8 engine to better accommodate a camper, bigger gas tank, and access cab doors.  Not to mention Tundras can be had for less than a similar year Tacoma.  We bit on a 2003 4WD Tundra TRD with the tow package and transmission cooler with 110,000 miles.

The maintenance work and modifications are detailed here.

Having selected our expedition platform, the hunt was on for a lightweight pop-up truck camper.  Four Wheel Camper, All Terrain Campers, and Phoenix Campers all made the short list, but the right price on a Palomino Bronco came up near us.  The Bronco 800 had a 3-way fridge, automatic furnace, and A/C as factory options weighing in at 1,22o lbs full of water and propane. 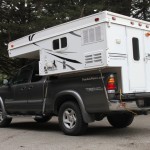 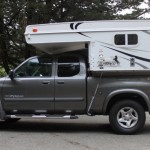 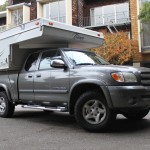 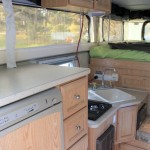 Interior of the Bronco 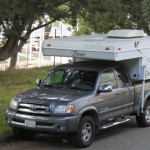 Similar to the Tundra, modifications for the camper are detailed here.