The first visions we had of driving down the Pan-American Highway had us in a rescue orange, late model Sportsmobile complete with ladder and yakima racks.  That very model went up for sale on the Sportsmobile website and haunted us for weeks.  We bent the budget numbers like an Enron executive in an attempt to justify the $70,000 purchase.  Reality soon set in and we realized we could equip and fund the trip for nearly half that. 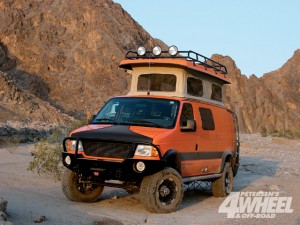 The stuff dreams are made of

Toyota was chosen on account of it’s expansive service network around the world.  While the Tundra is built in and exclusively for the US, should anything go wrong, the network will never be far.  While on the road we have already passed a number of authorized dealers.  Additionally, Toyota is a company with a history of vehicles that surpass the 200,000 mile mark.  And with our equipment budget, we just might see it.

Next, we briefly debated a Tundra versus a Tacoma.  Both would make exceptional platforms, but our need to haul a truck camper in the bed ended it quickly.  The payload rating in the Tundra is approximately 700 pounds greater than the Tacoma.  Some other advantages such as the larger fuel tank, roomy interior, access cab doors, and V8 engine also helped.  Even if we had gone the route of a sleeping platform or Flip Pac, we would have stuck with the Tundra for these reasons. 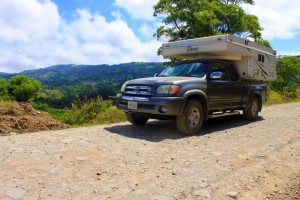 On the dirt roads of Costa Rica

When shopping around for first generation Tundras we specifically sought out the 2003 and later models.  In 2003 Toyota addressed a number of minor issues with the engine (O2 sensor and exhaust manifold) and frankly, improved the looks.  Additionally the factory towing package was improved in 2003 to include a heavy duty 130 amp alternator, 7 pin trailer connector, and most importantly, a transmission oil cooler.  We purchased a truck with the TRD  package but felt it was unnecessary as this upgrade only came with upgraded shocks, tuned suspension, and mud flaps.

In June 2010 we purchased  a 2003 4WD Tundra TRD with 110,000 miles and the maintenance and modifications began.  This was our laundry list of maintenance which we took straight from the manual.  It is everything that should have been done at the 90,000 mile service through the 150,000 mile service.  If you complete all of this yourself expect to spend more than a few weekends and at least $1,500.  If you have a mechanic handle the work, budget $3,000 – $4,000, the timing belt replacement alone will cost around a grand.

With the maintenance complete, on to the modifications.  In this department the sky is the limit and you could easily blow an entire trip budget on custom bumpers and suspension upgrades.  We felt that one dollar spent traveling is much more valuable than one dollar spent on upgrades, and, $2,000 can get you out of a lot of situations that 33 inch tires will not.  In that spirit here are the basics.

Modifications to accommodate a truck camper or heavy load.

This is part one of a series we are doing on overland tech.  Stay tuned for a 5,000 mile update and a post on preparing you truck camper for international overland travel.

Long term travel requires a healthy dose of optimism. Despite this there are a few disasters we constantly entertain such as failing transmissions, crooked policemen, identity theft, and the need for medical assistance in a foreign land.  We had the opportunity to experience the latter when Logan discovered a metal sliver embedded in his cornea while in Costa Rica. There were no insurance forms to sign, no promises to retain responsibility for our own stupidity or lack of dexterity. Instead of the usual legal rundown, there was a five minute safety demonstration and then we were zip lining through the air, whizzing past trees and wildlife. Before you jump into the harness and fly off the platform you imagine a  Continue reading →