Long term travel requires a healthy dose of optimism. Despite this there are a few disasters we constantly entertain such as failing transmissions, crooked policemen, identity theft, and the need for medical assistance in a foreign land.  We had the opportunity to experience the latter when Logan discovered a metal sliver embedded in his cornea while in Costa Rica.

There were no insurance forms to sign, no promises to retain responsibility for our own stupidity or lack of dexterity. Instead of the usual legal rundown, there was a five minute safety demonstration and then we were zip lining through the air, whizzing past trees and wildlife. Before you jump into the harness and fly off the platform you imagine a thousand different ways this could go wrong. Standing on a rickety wooden ledge built into a tree pushes your imagination into overdrive and following the simple instructions becomes a lesson in extreme focus. Knees bent, legs up, ankles crossed, head left, arm right, don’t squeeze the line, go! All the while you consider the height to pain ratio, the exact distance of the nearest hospital, and the likelihood of a monkey being involved in the terrible outcome. An hour later, our hearts still pumping from the rush, we appeared to emerge unscathed and agreed it was an excellent adventure, not too terrifying, not too easy, just right. 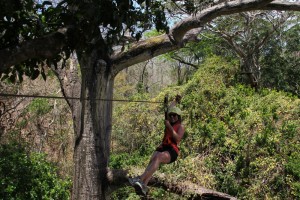 The thrill is evident in the facial expression

They say you should prepare for the worst and expect the unexpected. For these and other cliched warnings we purchased travel insurance hoping we would never have to use it. Despite his “safety” aviators, Logan realized the small metal sliver obstructing his cornea was firmly intact more than 12 hours later. We began researching our options for medical help and feared having to travel an hour away to the nearest hospital in Liberia. We checked with the town pharmacist first.

We found the local doctor two blocks away and entered the office hoping for the best and expecting the worst. Logan was not especially thrilled to have his eyeball poked at by a foreign doctor of unknown medical repute. Yet with each new development, we found ourselves breathing a collective sigh of relief. 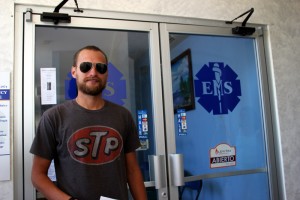 About to head into the medical office

The waiting room had a comforting atmosphere reminiscent of the ones back home. We waited for our turn behind the two people ahead of us. 15 minutes later, Mother, Father, Wife, and patient marched into the doctor’s office together. We all looked rather worried and the doctor appeared a little baffled at the large group of anxious gringos before him. Logan explained that our Spanish was very limited to which the doctor replied with a smile, English was no problem for him. Things were looking up. The injured eye was numbed with a local anesthetic and the prodding began.

Now laid up on the examination table, the doctor peeled back the eyelid and got to work while Logan attempted to quell the instinctive spasms. The sight was too much to bear for the others and they filtered back into the doctor’s office wincing with every sound that emanated from the examination room.  Using a combination of gauze and q-tips, the doctor appeared to be making some progress. Just when we expected him to approach Logan’s retina with the dreaded tweezers, he indicated it was all over and we were free to go.

After ten minutes of breath holding and eyeball poking we paid the $50 bill, happy to have one of our greatest travel fears allayed. 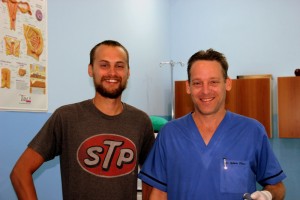 After getting through Honduras, we are starting to feel like old pros as we pull up to each new border station. Feeling like the worst is behind you lends a new sense of confidence as you wave away the helpers and focus more intently on your surroundings. Exiting Nicaragua early on a Saturday morning was a breeze. We entered just behind a large tourist bus and had a big line ahead of us at immigration. Coming from the Bay Area, waiting in line for various permissions and permits is a custom with which we are all too familiar. Bribery and extortion are rare here and making it through is merely a matter of getting yourself in front of the right  Continue reading →