Before venturing to San Juan del Sur we tried our hand at Lago de Apoyo and Granada.  At Apoyo the budget camping and kayaking options were limited so we opted to skip over to Granada which Lonely Planet described as “Nicaragua’s golden goose of tourism.”

In the goose we found a few polished streets with potential but nothing that could hold our attention.  It reminded us of Antigua Guatemala with less Latin charm.  Venturing two blocks from the hostel rich town center in any direction revealed a different city and seedy locales.  We found two cities: one built for the tourists and one left to the locals.  Perhaps because we arrived with jaded attitudes (something not uncommon among overlanders) we imposed our negative vibes on the location.  Attitude is everything and it varies when you spend months bouncing around various countries. 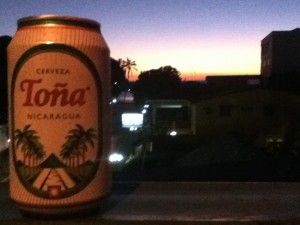 The beer of choice in Nicaragua

San Juan del Sur recharged our spirits.  A dispersed surf town with cheap barefoot bars quickly brought  back our love for Nica.  One evening we stayed out at Iguanas, a two story sandy beach bar, downing rum and cokes for a few hours and  were surprised when we got the $8US bar bill.  Nicaragua is a budgeter’s dream.

By the end of our time in San Juan del Sur we had the routine down and even found a hotel that let us camp under their palm trees next to the beach for an agreeable price.  We could have spent another week in Nicaragua but the allure of a gringified condo and familiar faces in Costa Rica pulled us reluctantly across the border.

Gringofied Definition: a place south of the border in which you can flush toilet paper.

Nica, our time was short but our experience long.  We left in love.

We are very excited to be featured on Rolf Potts' Vagabonding site as a case study! Check out our interview: