Nicaragua is not a country either of us could have easily placed on a map two years ago. Now as overlanders, places like these are the most exciting on the itinerary.  We entered from Honduras heading for Esteli. It took more than  few hours to loosen the tensioned grip on the steering wheel acquired during our one day trek through Honduras.

Once relaxed, we came to realize this as our new normal: driving country through country, exploring Latin American surf breaks and mountain towns.  Studying our guidebooks and maps, embracing the unknown ahead, and those moments of uneasy frustration and trepidation; we’ve been doing this for 60 days. Any departure from this routine would be foreign to us now. 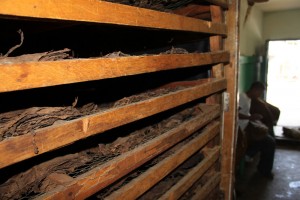 Racks where they dry the wrapper leaves

Once in Esteli, we circled the cobblestone streets asking around for a room and parking. Esteli has a charm that flows through the streets and thus we found many young travelers among them. For the first time in two months we found nothing but full hostels. No problem however, the owner of Luna Hostel offered to put us up in her house four blocks from the bustling town center. After getting settled we sought out a wifi rich cafe to download our notes from the Honduras crossing for other overlanders to follow.

We eagerly typed out the guide, exchanging idea between one another alternating coffee and Tonas. When the guide was finished, we felt a bit prideful having conquered one of the small remaining unknown frontiers. Knowledge conquers corruption and we hope the guide enables others likewise. The feeling is lasting and we know we will seek it out again soon.

Smoking had been an uncommon social occurrence throughout our travels, but since Esteli is the number two tobacco growing region in the world, we found ourselves suddenly unable to escape the plumes of smoke emanating from every cafe and bar. A visit to this town would be incomplete without a tour of a local cigar factory. We met our tour guide and fellow tour member (a Scottish bloke) we were to take the cigar tour with at the hostel cafe. The Scotsman was a few weeks away from the end of  his six months round the world travel. He and his wife opted for adventure in place of a traditional wedding and honeymoon. It should not surprise our readers that we instantly got along. 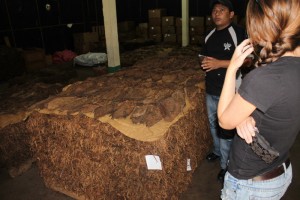 After lighting up some unlabeled grande puros from the stock room, we toured the numerous stages of cigar manufacturing. We were not surprised to learn the immense time and effort that goes into producing a single cigar. However, we were happily taken aback seeing each employee hard at work early on a Tuesday smiling from ear to ear, chatting with their neighbors, and rolling cigars with more speed and efficiency than any number crunching San Francisco cubicle dweller. There is not a scowl to be seen and each are proud to share their role in the process in Spanish dished out so fast we catch only every tenth word. 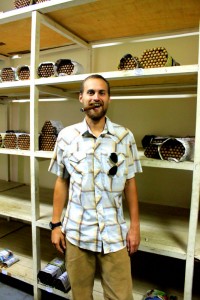 Please disregard all "No Fumar" signage

Esteli impressed and provided yet another example of a city you could spend weeks in and never tire of the offerings. Ironic how one year of travel reminds us of all that we do not see. The more we travel the more we realize what we are missing, not the inverse.

One day through Honduras

Crossing the border, especially at El Amatillo (Honduras), can be a traumatic experience. Weaving your way around various unmarked buildings in search of the necessary stamps and documentation, while surrounded by nosy helpers and clever scam artists, is likely to overwhelm and frustrate. Additionally, you have probably spent a day or two reading all the "what not to do" stories floating around the web, resulting in a dangerous combination of fear and the unknown. Entering a situation like this armed with specifics enables you to gain the upper hand. Here is our step by step guide to getting through it:

How to Get Through Honduras in One Day  Continue reading →

Although border helpers can sometimes prove useful, we strongly recommend against hiring
Close