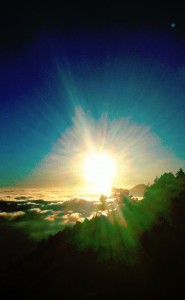 We pulled our 4×4 into the Tourist Police yard (Asistur) in the heart of Antigua on Tuesday afternoon, excited to partake in some much appreciated free camping, complete with showers, bathrooms, internet, and 24 hour police security. After finding a spot for our rig among the dozen others in the yard, we were approached by a group of Germans. The next day at 0500 they planned to leave camp to summit Volcan Acatenango (13,045’) and were eager for us to join them, we quickly said yes.

After the usual preparations, 0415 arrived rapidly. 13 of us packed into two trucks and headed up the winding dirt road toward the looming volcano in the Western horizon, windows down, mariachi blaring. Included in our large group were two police officers, hired to guide us on our volcanic journey.

We stopped at what appeared to be a 19th century farm which turned out to be our trail-head. We passed fields where farmers were planting hillside plots by hand and hauling their crops via the same trail we would use to ascend. I contemplated the US food structure, flawed as it may be, the system gave rise to the very leisure class that now bemoans it. Self destructive, but maybe rightfully so.

These are things you use to distract your mind as you walk begrudgingly up a volcano. Latin America does not believe in switchbacks and you must keep your mind off the 35 pounds on your back and the 4,000 feet of uphill ahead. 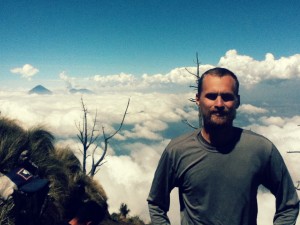 When we stop, we exchange words as a group in a mix of Spanish, German, and English. As we continue we quickly learn Western Europeans and Americans have different philosophies in climbing mountains. We pass through several campsites between 10K and 11K feet that will no doubt be occupied by Americans that very evening. We pass these spots en route to our campsite, a mere 500 feet below the summit. We arrive there at noon, in order to attain the summit twice before departure the next day. We planned to summit once in the late afternoon and then a second time early the next morning before sunrise. I now more thoroughly understand the lack of American presence among the world-class mountaineers (with apologies to Mark Twight). 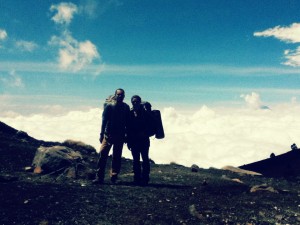 Without agreeing to in any way other than a mutual exhaustion we all fell into our tents for an afternoon siesta. We nursed headaches and swollen feet in our campsite above the clouds and skipped summit attempt one of two. That night we celebrated around a campfire and hit the sack before 8PM in anticipation of a 0330 wake up call. 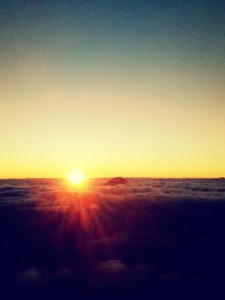 Volcan Agua peaking through the clouds

When the alarm sounds, the early hour feels all too soon, despite the 7.5 hours of restful sleep. We find the site filled with frozen water bottles and eager Germans. Moving quickly through the darkness we began hiking the last 500 feet of volcano. Before you know it we’re on the crater rim and hear what sounds like a not-so-distant avalanche. A quick rundown of SAM logic reveals there is not a drop of snow on this mountain and the rumbling emanates from nearby Volcan Fuego, the moonlight reveals her plume.

We circled the rim atop the cloud cover for another hour, switching our sights from the erupting volcano to the slowly approaching sunrise in the eastern sky. You can easily spot both from one vantage, but the biting cold encourages us to stay on the move. We desperately attempt to capture the scene with photographs and words. When the sun finally appears, the cameras are packed away and words have escaped our grasp. We are left with only a hushed silence as we contemplate our own existence on the solitary walk downhill. 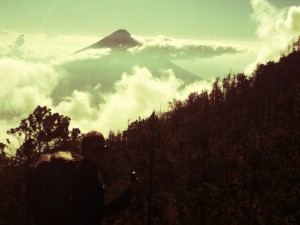 Stopping to take it all in on the decent

After basking in the morning sun at camp, we pack it up and begin an uneventful trek down to the trail-head; our movements more resemble falling than hiking in the soft, silt dirt. Three hours later, we find a single pickup to haul all 13 of us back to yet another camp.

Afterward, like all mountaineering adventures, somehow two days of sweat and dirt transform into something much larger than the sum of its parts. You forget the pain and turn your attention to the next mountain.

One thought on “Volcan Acatenango Guatemala”

We arrived in Pana after sunset via the detour road through Godinez. What appeared to a be a quick route from border crossing to campsite quickly turned into an uphill battle between us and the road as we gained 5,000 feet. Although the winding highways were in fairly good shape, navigating through large city centers was an extravagant waste of daylight. If there is a street sign, it is often painted onto the side of a building and most have faded away completely. Further, the highways of Latin America were built to pass through the colonial cobblestone streets of each town center. Imagine I-80 routed through the one-way alleys of Chinatown. Finally arriving at camp, we set up under moonlight  Continue reading →