Almost as if being punished for our unusually exuberant attitude toward Quito’s biggest tourist hot spot, the Mitad del Mundo, the fuzz was on our tail and the day ended with an expensive shakedown and a dirt parking lot at sunset.

Watching the GPS hit the 00′ 00.000 mark was a serious milestone for us, moving from the Northern Hemisphere to the Southern our spirits were high. We were ready to pick up our friends visiting from California and take as many hokey tourist pictures as could fit on our 16gb memory card. 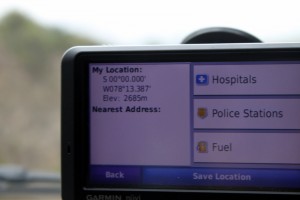 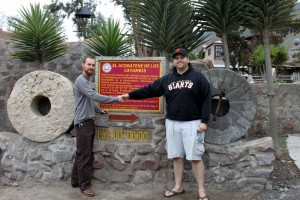 Logan & Ant reunited at the middle of the world 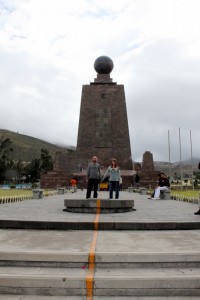 Together in different hemispheres 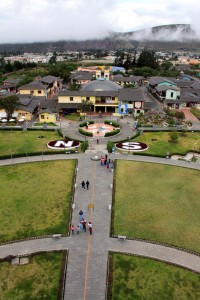 At the top of the Mitad del Mundo monument 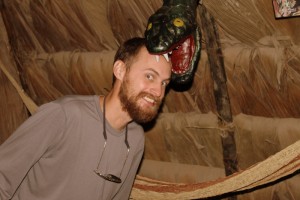 Tourist for a day

We had our pictures, we had our post cards, and even a hand-painted Peruvian flute among other gift shop knick knacks. Now all we needed were cocktails and some good old fashioned catching up. Enter the Quito police force, in full effect this Friday evening.

Nothing about the fourth and final police interaction felt legitimate. The face mask clad officer had our papers and led us down a shady, deserted alley. Our limited Spanish and his nonexistent English grew heated but in the end we burned $80 on threat of citation and vehicle impound for two days. Our request for a receipt was apparently very humorous. 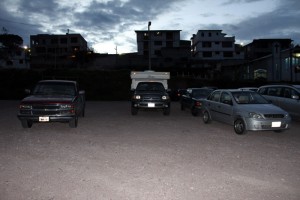 For driving on Friday with a license plate ending in 7: a police escort to this all inclusive dirt parking lot until 7:30PM

Lost reservations, unfriendly faces at the hotel, and excessive bar surcharges had us feeling very unwelcome here. We decided to escape the city limits at first light but Quito would have the last laugh. Our GPS had a two hour conniption fit attempting to get us out of the most jumbled city infrastructure known to man.

And then there was Baños. And all was right with the world. Arriving on Saturday was perfect, the town was hopping and we were ready to jump in on the action.We started the evening with $1.50 tall boys and foosball with the locals. Much later we had our first encounter with aguardiente in the form of flaming Bob Marley shots. The few pictures we managed to snap are not family friendly in the least, so we’ll just leave you knowing we had a ball in Baños and forgot all about Quito. 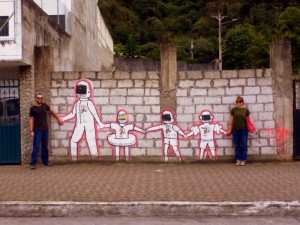 On our way to detox at the springs the next morning

My eyes snap open, my heart is thumping erratically, I can feel the adrenaline coursing through my veins. I don't believe I have ever been more aware of my consciousness as time begins to slow. In the total darkness of midnight I lift my head from the pillow and feel the warm blankets being shuffled frantically. In one swift movement Logan has bounded from the bed to the camper door and swiped the keys from their hook. The truck alarm echoes throughout the Otavalo foothills for only a few seconds. Now enveloped in silence we stare at each other wordlessly in the darkness. Our minds are racing but we remain motionless. The alarm is triggered only by a broken window  Continue reading →