Camped out at the foot of the Kuelap ruins, we awoke to find ourselves parked in the midst of a Sunday morning futbol match.  Peeking out the camper windows at 6AM we saw toddlers, teenagers, and parents engaged in fierce competition. A middle aged man gently nudged his son out of the way and stole the ball, hollering in victory as he made his goal. Futbol is serious business in these parts.

Grateful for the unexpected wake up call we set the percolator on high and made an early start on the ruins. Once inhabited by the fierce warrior people known as the Chachapoyas (people of the cloud), their ruins are a testament to the ingenuity of an isolated people. Using nature to their advantage they made additions to a natural rock wall at 12,000′ making their fortress in the clouds accessible only by three narrow gated stairwells. 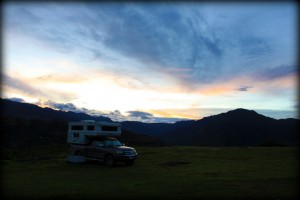 Our secluded campsite at the foot of the ruins

Historians speculate that if the Chachapoyas people had not sided with the Spanish, and the Incas had fought their last battle here, they may very well be here today. Having driven the 20km up and hiked the final two, we believe it. We dubbed the route “the Peruvian road of death” and were extra cautious with our photography. Scampering out of the truck, barely focusing the camera, and hoping one of the twelve shots snapped at random would come out. Nearly every turn is a blind curve staring down a crumbling 5,000′ drop. 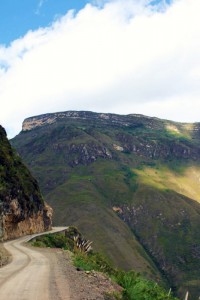 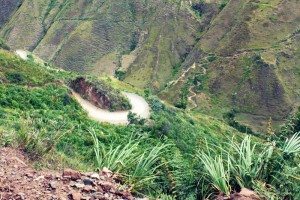 The view from the passenger side window 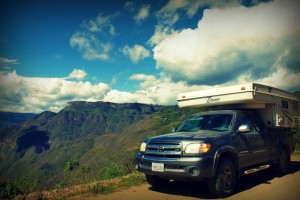 The natural rock wall of Kuelap in the background 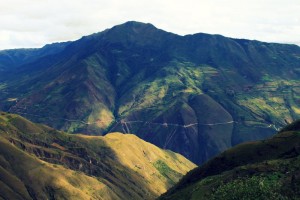 The tiny route cut out of the mountain, we drove that. Did we mention we love our truck?

The ruins of Kuelap are spectacular and well worth the heart thumping drive. Definitely a hands on experience, there seem to be no limits on visitor exploration. We tread carefully around the ancient site until we saw a large group of students climbing up the tower at the edge of the natural wall. With the Kuelap archaeologists in an ongoing race with local grave robbers, it may not be long before limitations are put in place here. For now, we are more than happy to get as close as possible to an incredible ancient past. 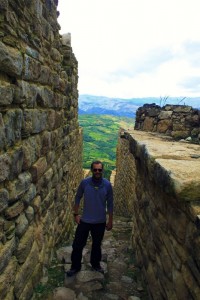 Making our way up the narrow staircase entrance 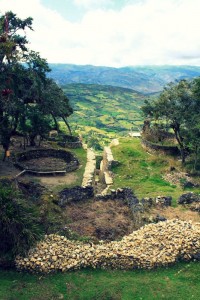 Looking down on the valley from the Kuelap fortress 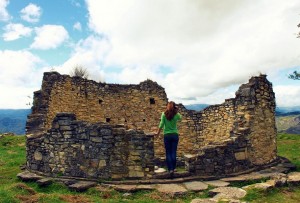 Breezer explores one of the houses 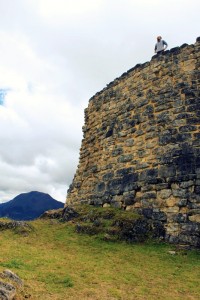 Logan climbed to the top of the tower, no tourist regulation here 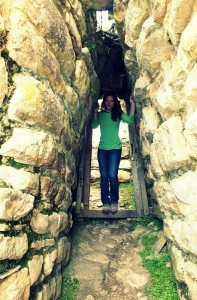 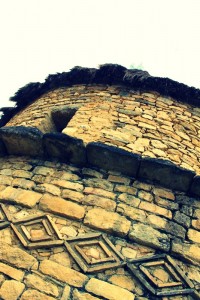 One of the circular houses of Kuelap featuring the rhomboid pattern

There we were, cruising southbound from Chachapoyas when a diabolically camouflaged speed bump materialized beneath the front wheels.  As the rear wheels hit, the spring loaded turnbuckles had just enough play to allow the camper to shift forward an inch.  And thus we were liberated from of one of our rear windows.

We may or may not have been party rocking at the time of the incident.

Not 5 kilometers later the check engine light illuminated.  We've got an 02 sensor out along with a fuel filler cap gasket gone bad.  Problems easily remedied by two visiting friends who don't mind packing a few auto parts in their carry-ons.