Unbeknownst to us, protests were raging and roadblocks were going up in Chile’s Aysen region. We were heading into the capital, Coyhaique, the only reliable place to refuel on the 1,200km Carretera Austral. We rolled into town on a sunny Friday afternoon expecting only to resupply and hit the open road once again. 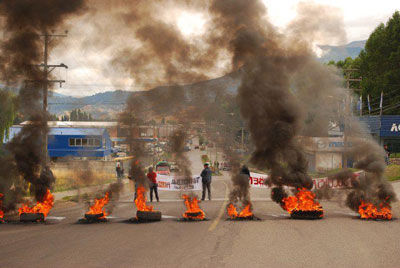 Despite the remarkably relaxed atmosphere in town, we learned fuel service had been suspended for the past three days. This was hard to believe, no one seemed bothered. The military presence on every other corner seemed like overkill. Soldiers in riot gear had no one to preside over except kids flying by on bicycles and tourists browsing local crafts. So we followed suit, wasting away the weekend chatting with a local fly-fishing guide. 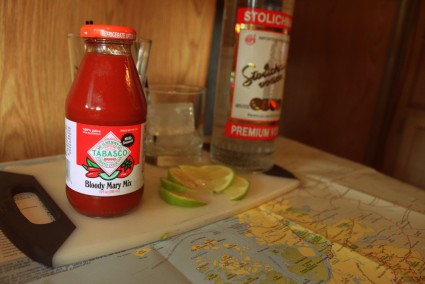 Stocked up on Bloody Mary supplies and got down to business

At sun up on Monday the town awoke and started lining up at the Copec gas station. We arrived late to find the line was already occupying 16 city blocks, nearly two miles long. There was no gas, no promise of gas arriving, just a rumor that a tanker might arrive after sundown.

We pulled in line and waited. For 13 hours we sat, advancing whenever somebody ahead of us gave up hope. Sundown came and saw only the arrival of a peaceful protest. The Aysen region is fed up and has been for many years now. Here are their demands. 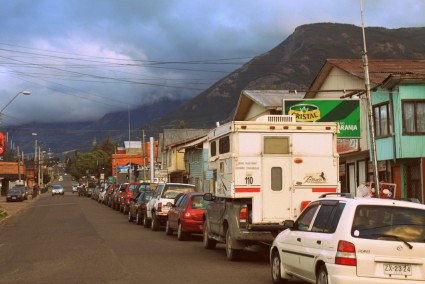 The gas station is well out of sight, about 10 blocks away 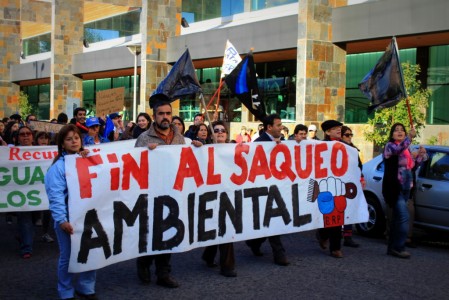 "End the rape of the environment" 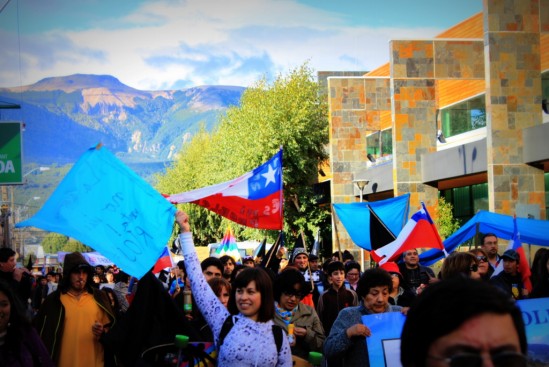 The banners and flags proclaimed a wide range of united dissent

After sundown our fellow waiters began to abandon their cars, saving their place for the night. We gave in, popped up, and settled in for some urban camping. But at 10:30 people were sprinting toward their vehicles, every car on the block firing up their engines, and joyous shouts of “petrol, petrol!” filled the streets.

At this point there are nearly a thousand vehicles in the line, hundreds both ahead and behind us. Polite line etiquette is a thing of the past, every man for himself. Bleary eyed and pajama clad we scramble to the truck, forgetting the surfboard and whacking the still popped up camper into an overhead grocery store sign.

We don’t know why but suddenly people are freaking out. Flairs are going up and chaos is taking hold. Along with the sun, the peace has vanished and things are turning ugly. People running from the scene stop to warn us: ¡Tiene que salir! (you have to leave). We didn’t know it at the time but they had taken down an electrical transistor and set it ablaze with anything they could get their hands on. 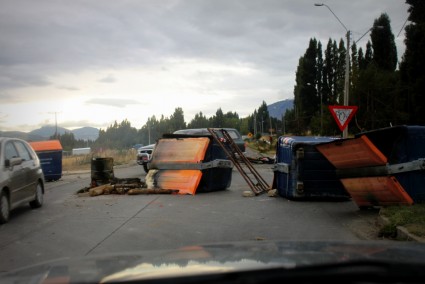 Far from our spot in line, this was the scene at the edge of town

They had successfully intercepted the fuel truck with a flaming road block. To celebrate the achievement they were headed back to town, coming directly at us, throwing bricks and rocks at anything and everything. We got the hell out of there, warning other overlanders on our way out (a French family asleep in their RV!).

Early the next morning, the long line had vanished. Pulling up nearer the gas station we realized they had gas! An hour later we had our rationed 6 gallons… Combined with our 5 gallon jerry can we could make Rio Mayo in Argentina. 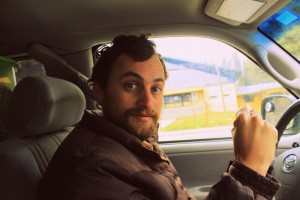 Not quite awake, but happy to be in a moving line 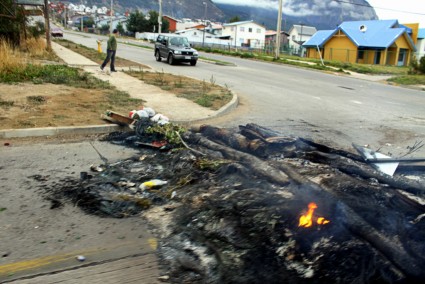 In the cold light of day, the aftermath is a little unsettling 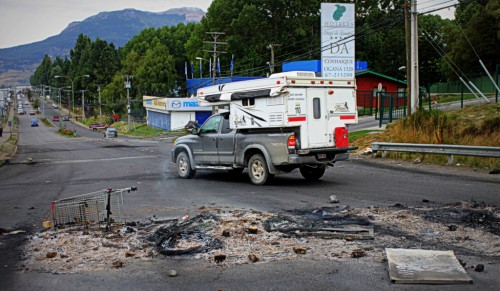 Barely popped down and making a hasty retreat

We headed out of town via a little-used dirt road squeezing around still smoldering piles of rubbish (and nails!) before arriving at one well-manned roadblock. For one hour each day they allow passenger cars to cross. We buzzed by at the tail-end of this window. Three hours and a border crossing later we pulled into Rio Mayo Argentina on fumes learning they too were out of gas. 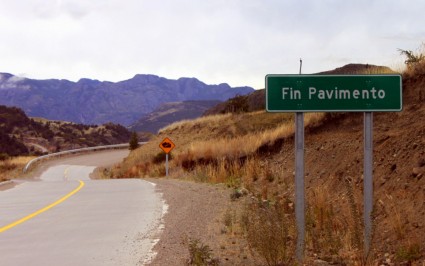 **Luck was on our side, it seems we saw the last fuel tanker for a while. Our friends over at Bodeswell are still waiting**

Overland advice series, 10 of 10. Neither of us are medical professionals. What follows are our amateur observations. Consult your doctor before making a decision. Malaria