It was decided at the start. We would rely on good old fashioned paper maps and a compass to route us through the Americas. That is to say no GPS solution had yet presented itself.

So, we navigated Mexico and Central America using the latest 16th century technology. It proved to be a valuable experience in patience, culture, and geography. We quickly learned Castallano for turn left at the tree and keep straight ahead until you pass a shack. More importantly we learned that Latinos will gladly and confidently provide directions regardless of their knowledge of the route. 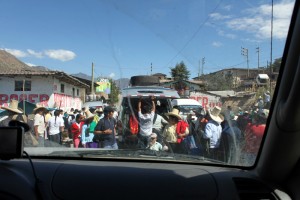 We circled many colonial streets in confusion, cursing every municipality from Mexico to Honduras; the camper groaning with the weight of our misdirection. Eight countries later, in Panama, we had our paper system of navigation zeroed in. And then there was Vince.

Like a ray of sunshine bursting through a cloudy sky, a San Diego native on a KTM Adventure showed us the light. He was returning from a two year sojourn and presented us with free routable maps for every country we would be passing through. 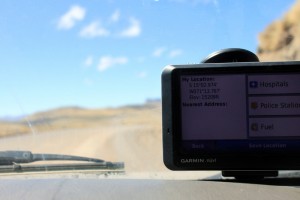 High as a kite en route to Arequipa Peru

Now using the latest 21st century technology, including Garmin MapSource, we can route the entire continent with waypoints of prime camping spots, grocery stores, and gas stations. While still in Peru we can have all of Bolivia routed and plotted. Turn-by-turn directions through large cities like Lima are the security blanket you need when every lane of traffic is attacking you with a vengeance. 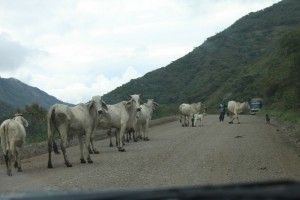 What are you doing in my pasture?

If you’re worried about losing some sense of adventure with your GPS, fear not. Latin America always has the last laugh. Landslides, changing political tones, and even emerging and declining economies ensure that roads are constantly transforming. That rotted out, single track, suspension breaking, switchback will find you regardless of your technology. 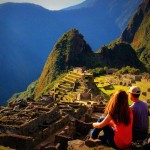 We arrived in Cusco with a feeling of renewal, a giddy excitement for the road reminiscent of  our first days on Mex 200. The road to Cusco had been inspiring in so many ways. Scrambling after our guide at Machu Picchu a few days later, catching the first glimpse of the  ruins and the majesty of the surroundings felt radically appropriate. Nowadays we throw around the word ‘sublime’ to describe gooey deserts or overpriced handbags. In Immanuel Kant’s epistemology, it meant something limitless, an aesthetically pleasing entity so huge that it made the perceiver’s head hurt. Machu Picchu isn’t just beautiful, it’s sublime  Continue reading →. -- Mark Adams Turn Right at Machu Picchu   There is a great deal of