Sitting at the breakfast table surrounded by tousle haired, caffeine hungry men, I quoted aloud the first line of my new book Player Piano. Unfortunately this was not my audience and I was met with blank stares and silence. After a moment Kelly piped in from across the room, “Is that Kurt Vonnegut?” I was awestruck. I had read one sentence. “How could you possibly know that?” I asked, desperately trying to keep my jaw in it’s upright position to hide the fact that she had just completely won over my literary heart. “I dated his nephew.” This turned out to be one of the many great stories Kelly kept in her back pocket.

Cristian appeared moments later asking if any of the bleary eyed breakfast crew were going surfing today. We considered the sunless sky and the frigid temperature and shook our heads guiltily. Cristian is not a man who lives in the negative, especially when it comes to the surf. He scurried around the house preparing for the impending board meeting and before making his exit asked if anyone had changed their minds. We hadn’t, but we looked forward to hearing him wax philosophical on his oceanic exploits later that night…

After tossing a few back at a reggae show in Barranca, we were headed home when Cristian decided we needed one last stop. At 2AM we coasted onto Lima’s sandy stretch of beach and turned the volume up on our thoughts. We swapped philosophies on everything from travel, to love, to Jack Johnson. We learned about the mafia, we learned about Peru, we learned about Lima, we learned the good and bad side of Pisco, and we learned how they live better. 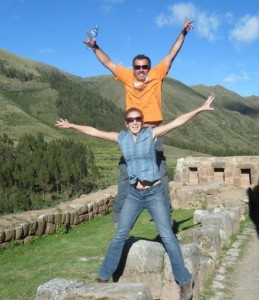 The charismatic duo of Peru Roadtrip

The good vibes and positive energy emanating from these two are absolutely contagious. As we pulled away from their place at Peru Road Trip the next day, we popped in Cristian’s latest surf mix and cruised through the city feeling mellow and happy. Listen to our favorite track here.

Sometimes living better is just a matter of learning better.

One thought on “One Heart. One Love.” 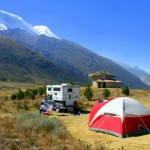 A weeklong sojourn in the Andes was complete. We had just finished two beers in the dusty town of Huaraz when Paul arrived. To celebrate our recent summits and Paul's arrival at 12,000' we started into the first bottle of rum on our 35 minute taxi ride up to the lodge. Four bottles later, our camper was cozy and warm with the cheer of friends reunited  Continue reading →. This cocktail party of four was our first maximum capacity shindig. Accordingly, noise complaints were filed the following morning. For two weeks we fell into a new kind of rhythm with these guys. Weekdays were spent camping and hiking in the mountains. Weekends were consumed with a startling pattern, ambitious attempts to visit