10,000 miles since San Francisco and our overland equipment is well intact.  The Tundra and the Bronco 800, despite a few small maintenance issues, are holding their own.  When leaving California I had two major concerns: the weight of the payload versus the Tundra payload capacity and the structural integrity of the Palomino camper. 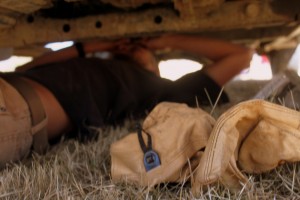 Replacing a pair of 02 sensors

To deal with the payload issue I did what many with truck campers do and installed Firestone suspension airbags to help handle the weight on the rear leaf-springs.  They were considerably cheaper than adding an extra leaf and, as published, gave our overloaded Tundra a smooth ride.

10,000 miles later they’re falling apart.  Structurally, I’ve broken 4 bolts and found they need to be adjusted regularly.  The airbag itself is starting to show deep signs of wear where the rubber meets the metal.  By the time we get to Ushuaia I expect to have replaced every original bolt along with both airbags.

This year on the PanAm there are three truck campers that started off with new Firestone Ride-Rite Airbags.  Jon and Anne threw their mutilated airbags to the wayside after the brackets on both sides developed fractures.  Adventurous Spirits had to air freight a complete new set while in Lima.  Our situation seems to be a best case scenario.

The Ride-Rite air helper springs are not expedition quality.  If you’re headed down the PanAm, look into other suspension helper options or plan on carrying an extra full set for replacement parts.

One Heart. One Love.

Sitting at the breakfast table surrounded by tousle haired, caffeine hungry men, I quoted aloud the first line of my new book Player Piano. Unfortunately this was not my audience and I was met with blank stares and silence. After a moment Kelly piped in from across the room, "Is that Kurt Vonnegut?" I was awestruck. I had read one sentence. "How could you possibly know that?" I asked, desperately trying to keep my jaw in it's upright position to hide the fact that she had just completely won over my literary heart. "I dated his nephew." This turned out to be one of the many  Continue reading → great stories Kelly kept in her back pocket. Cristian appeared moments later asking