Our first bush camp was on the tip of Baja.  We heard from a several experienced boondockers about Playa Tecalote.  This beach had no services, no fees, and no fences or watchmen to keep out those evil-doers.  It was nothing but undisturbed beach.  About the third person to bring it up described it to us as “a real life Corona commercial.”

That was enough for us, we were going to give bush camping a shot. 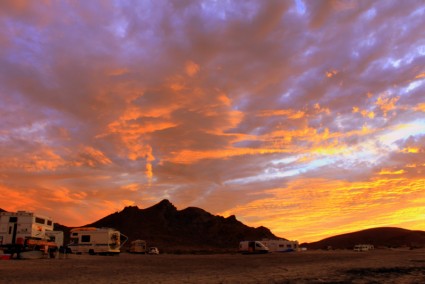 Approaching the beach we shifted into four wheel drive and approached a small group of dispersed RVs and camper vans.  Popping up the camper we were sure to have the grizzly mace at the ready.  Over the next three days we bathed in the warm Sea of Cortez, hiked the nearby rock formations, even clinked Coronas.  It was second to none of any place we stayed in Mexico.

After that we rarely bush camped until Ecuador and that was a mistake.  We avoided it partly due to fear of the unknown and mostly not knowing how to go about it. 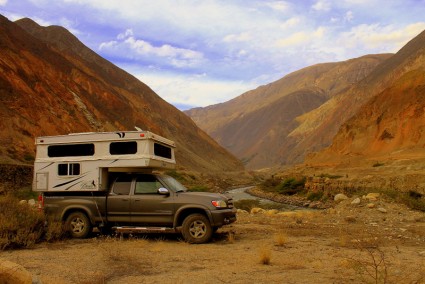 Bush camping by definition is camping without amenities or fees, anywhere you please.  Often we’ll find a nice covered overloook just down a back road or near a river.  Other times we pull just off the road in a rural area to break up a long drive.  Much of the time we get GPS coordinates from camping lists.  Rather than a specific spot, coordinates give us an idea of those areas that are good for bush camping.

We never bush camp in or around urban areas, but know others do.  The countryside and small towns are more often than not tranquillo, but it never hurts to ask a local before settling down.

Camped out near the Kulep ruins in Peru

Turning off down an unmapped dirt road toward what might be a river, really gives you a feeling that you’re ‘out there.’  Looking back at our favorite routes through Peru and Ecuador, they could not be accomplished without the confidence and ability to camp where no man has camped before.

Most scenic, quiet rest, picture perfect, and free; the way of the bush camp.  Waking up miles away from any hint of civilization is the overland way to start your day. 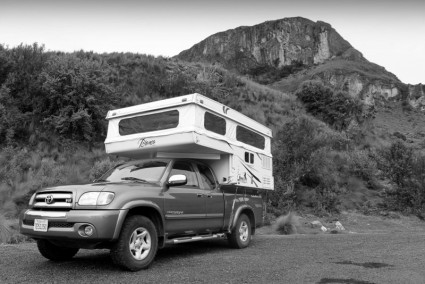 3 thoughts on “Camping in the Bush”

Searching for an End

The day we left San Francisco we didn’t know there was a Ushuaia. We didn’t know about Route 3, Tierra del Fuego, or what lay at the end of the PanAmerican Highway. We only knew that one day we would get there. Because the reactions to our goal were so contrary, we eventually stopped telling people our plans at all. By December 2010 when asked about our future, the response was reduced to one word, either moving or traveling. Mentioning Latin America, driving, or the PanAmeircan Highway put us on the receiving end of long-winded speeches filled with doubt and concern.  Continue reading → The people that believed in us could be counted on our own four hands. As it turns out there